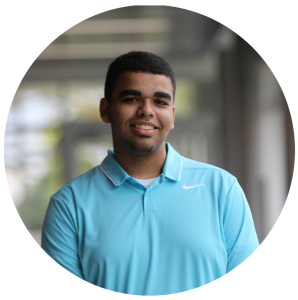 Engineering Business, Technology, & Communication Human Services
← Back to A day in the life

How Being in APEX Changed Me Personally and Professionally

I moved to the Waukee Community School District when I was in seventh grade. Prior to this move, I attended school in Fort Dodge, Iowa. Early in my schooling, I struggled and was pulled out of school to be homeschooled in the sixth grade. At the time, I was struggling socially and academically with reading, writing, and math, and I had a very negative outlook on life. I did not believe that I could achieve anything and that I was destined to be a failure in life.

Moving to Waukee was a challenge since I struggled with both academics and with making friends. It was not until ninth grade that I began to make changes to better my life. At this point, my inner monologue started shifting and becoming less negative. I took the initiative to catch back up on academics, but the only way I knew how to do that was by watching YouTube videos. This helped, especially with math skills. At that point in my life, I did not even know how to do basic division, so I decided to work on my own to catch back up.

Entering tenth grade, I could see that my hard work was paying off. Even in the summer months when peers were taking a break from school, I continued to work hard to teach myself the skills that I did not acquire in elementary school. While my anxiety regarding academics was subsiding, I still experienced a fair amount of social anxiety; therefore, I continued to isolate myself in the halls of the high school. There was a stigma that followed me all those years, and it was very negative. No matter what I did, I could not shake the fact that peers looked at me as the kid with behavioral problems, so making friends continued to be a challenge for me.

During my junior year, my teacher Mrs. Dykstra kept encouraging me to take an APEX class. I remember thinking that the program sounded good, but I was nervous to sign up. I had never worked in a team, and I had never presented to a group of people before. Nonetheless, Mrs. Dykstra did not give up discussing taking an APEX class with me, and I decided to enroll in Russ Goerend’s Designing Communications Solutions class.

I walked through the doors of the WILC in August of 2017, and to be honest, I was pretty nervous to begin the semester. I knew that my internal monologue needed to shift if I was going to be successful. My first semester of APEX I was in DCS class. I designed a banner for the APEX program that will be used at professional conferences and fairs. I also did photography for the City of Waukee and collaborated on lots of other projects. Academically, I surpassed where I was supposed to be, and I also started making friends. Additionally, I discovered that I had a strong interest in technology, but I also began to realize that I liked the design aspect of marketing as well. It was this realization that led me to enroll in my second APEX class Developing Web-Based Technologies with Scott Palmer. I thought that taking Mr. Palmer’s class would help me clarify if I preferred working with technology for coding or design purposes. One of the things that I really appreciate about the APEX program is the push to define career paths.

Being a part of APEX has changed my outlook both personally and professionally. Now I have decided to go to college, so I can continue my love for technology. I am also exploring the possibility of working with troubled youth so that I can give back. My outlook on school has changed because of the APEX program. APEX makes learning more relevant. Because of the professional nature of the program, it has also changed how I think and act.